Where can asbestos be found?

Asbestos is a naturally occurring fibrous silicate mineral which has been used in a variety of useful products for hundreds of years since Roman times. It is found throughout the world including Africa, Australia, Canada, Russia, the United States of America and China.

Typically, asbestos can be found in some types of rock such as serpentines, some mafic rocks, altered ultramafic rock, metamorphosed iron formations, metamorphosed dolostones, alkalic intrusions and carbonatites.

The basic element of the asbestos minerals is the silicate group, formed from oxygen and silicon. In its natural state, asbestos occurs throughout much of the planet: indeed, it is found in two-thirds of the rocks in the earth’s crust. The fibres are released by erosion and carried by the wind; thus, depending on where you live, you are most likely inhaling between 10,000 and 15,000 fibres a day.

All amphibole (brown and blue asbestos) mines, mostly located in South Africa and Australia, were closed in late 20th century due to their cause of mesothelioma and lung cancer.

In the U.S, “asbestos is found in 20 of the United States and has been mined in 17 of these states, including the Appalachian region, California and Oregon. In a period extending from the late 1960’s to the early 1970’s, asbestos mining peaked in the United States, with over 299 million pounds mined each year. By 1987, production has diminished to 112 million pounds annually” thanks to the ban of use of brown and blue asbestos in developed countries.

Russia is the biggest chrysotile mining country worldwide. The 125 years old town named Asbest – northeast of Yekaterinburg city, Russia – has a chrysotile mine which has a capacity forecasted to be able for exploiting in 150 years. Asbestos content of stones of this mine is 2.3%. The mining site is 11.5 km long , 1.8 km wide and 340m deep. In the town next to the mining site, 68.000 civilians are living a stable life with an average mortality rate or even lower compared to other regions. Many families in this town has up to 3 generations working in the chrysotile mine without any sign of cancer or inhalation diseases related to chrysotile exposure. The term of “safe use of chrysotile” has been applies by the fibre production factories and fibro cement products containing chrysotile factories for over 87 years. Accordingly, all the production lines are closed system and automatic, workers have to strictly follow occupational safety procedures. Apart from being fully equipped with labor protective gears, workers also have frequent health check in order to detect any symptom.

Brazil is the world’s third largest producer of chrysotile asbestos, after Russia and China, and also is one of the top countries in chrysotile consuming.  The Cana Brava mine, belonging to SAMA S.A company, located in Minaçu has a total area of 45 km². In over 50 years of mining, the chrysotile mines (including the Cana Brava A pit 1.525m long * 679m wide * 228m deep and the Cana Brava B pit 1.111m long * 855m wide * 238m deep) are a critical factor making Minaçu one of the richest cities of the Goiás state. Every year, the mine provides approximately 300.000 tons of chrysotile, accounting for 10% of the chrysotile market worldwide. 54% chrysotile production of the mine is used locally to make asbestos-cement products, especially roofsheet with chrysotile, 46% of the production is exported to over 20 countries such as Sri Lanka, India, Thailand, Indonesia, Mexico, Colombia and United Arab Emirates. One of the most important projects implemented in the last 30 years is the “Safe Use” program with chrysotile, which includes the Super software assessing the risk of accident, instruction documents set for preventing and controlling chrysotile fibre particles emitted in the production and other training courses medical assessment programs. The program was considered as the standard for sustainable development and used as a reference for many mining companies around the world.

Besides, the chrysotile mining capacity of China and Kazakhstan is also a noticeable number. In India, a small amount of tremolite asbestos is still mined. For many developing countries, imported chrysotile fibre is still an essential input material for building material production such as roofsheet, wall tile, water pipe, chrysotile – cement sheet..

The distribution map of chrysotile 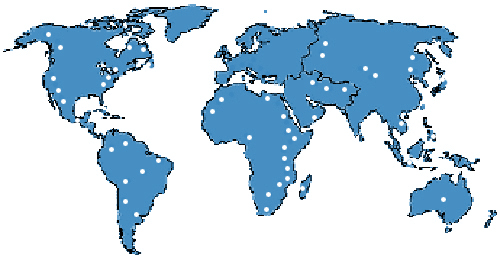